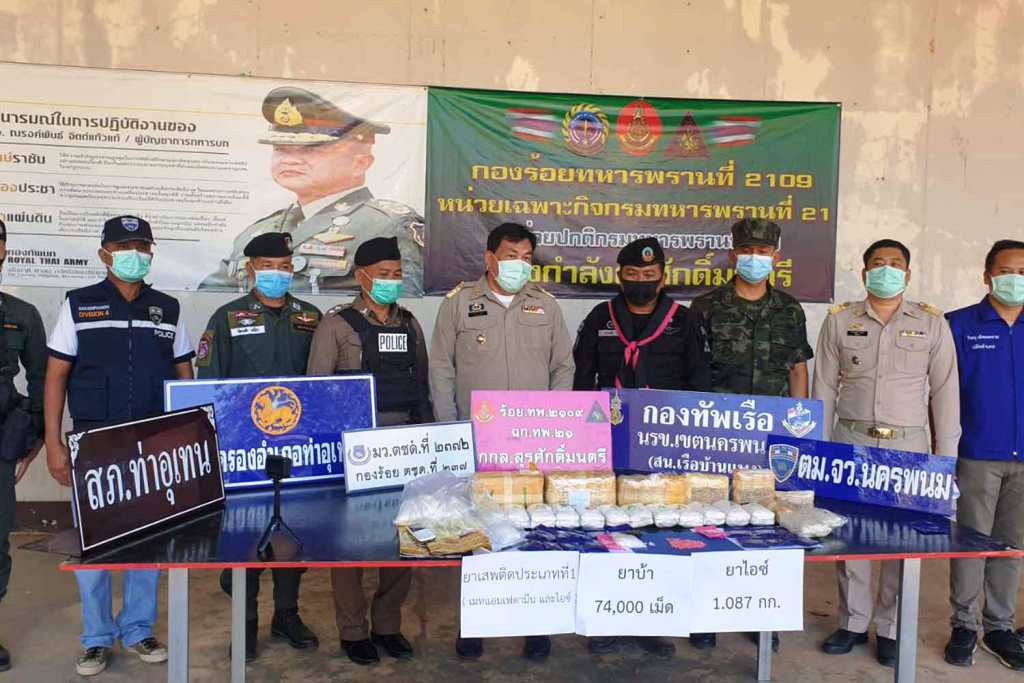 Army Rangers have arrested a man and seized 74,000 meth pills and a kilo of crystal meth that had been smuggled across the Mekong river from Laos, in Tha Uthen district on Tuesday night.

A patrol from the Army Rangers laid in wait on the bank of the Mekong river, near a village in tambon Tha Champa.

They were deployed on information that drugs would be smuggled from Laos on Tuesday night.

The two boxes contained 74,000 meth pills and 1.08kg of crystal meth, or ice, in small packages. The drugs were valued at 10 million baht, and believed to have been smuggled by boat from Laos.

Mr Withaya appeared to be high on drugs when arrested, the soldiers reported. He was charged with drug smuggling and handed over to Tha Uthen police for legal action.

Police in northeastern Thailand have arrested 4 members of a drug gang and seized more than 600,000 meth pills  in an operation which began late last year.

Following an expanded investigation, police arrested Krisda Pattamarat, 33, at a house in Ban Kok Noy village in tambon Ban Pet on Sunday. He was caught with 36 meth pills and 5.91 grams of crystal meth in his possession.

With information from Mr Krisda, police searched a house in tambon Sila of Muang district and found 570,036 meth pills inside three cardboard boxes.

According to Pol Maj Gen Sahaphum, the four suspects identified their ring leader as “Jack”.

The drugs were taken for safe-keeping to the house at the Eua-arthorn housing village where they were found, to be later distributed to clients in Khon Kaen province. The investigation was continuing, Pol Maj Gen Sahaphum said.